In Conversation With: Daan and Laïs, Director and Co-President of Utsopi 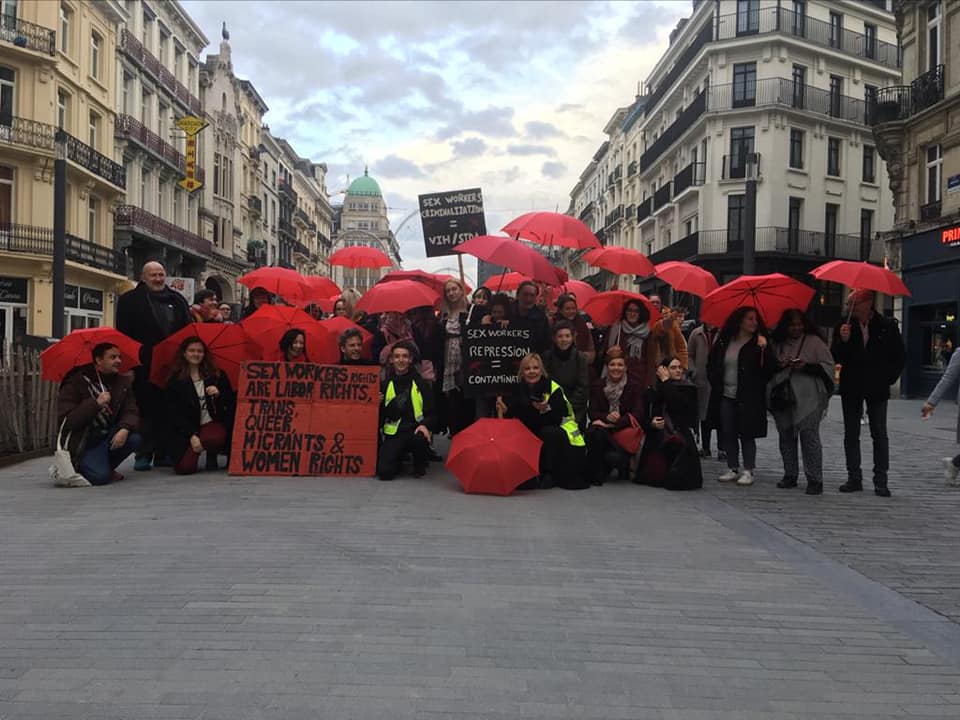 On Friday 18 March at 1:35am, the Belgian Federal Parliament voted in favour of rights-affirming legal reform - with 70 for, 41 abstentions and just 4 against. ESWA Communications Officer Marin Scarlett sat down with Daan Bauwens, Director of Utsopi, and Laïs, Board Member and Co-President, to talk about what this achievement means for sex workers in Belgium.

Marin: Daan and Laïs, thank you both so much for taking some time out to chat to me! Can you start by telling us a little about the history of Utsopi, and how you came to be involved with them?

Laïs: I’m a former social worker. When I separated from my husband some years ago, I experienced money struggles as a single mom, even with a full time job. I wanted to change my career but couldn't find something else that would pay enough. I sometimes found extra jobs to provide more money, like bartending, but still it wasn’t enough and I worried about my future as I was always the oldest and it was sometimes quite exploitative. I started to think about being a sex worker. First, I tried erotic massage and after talking with a colleague, decided to try full service sex work. At the start of 2019, that same friend saw a Facebook event organised by Utsopi. When I went there and read for the first time the “manifeste de la putain”, I realised that it expressed thoughts I had about my new career that I wasn't previously able to put into words. It was a really good surprise meeting with Utsopi. After another one of their events I became a volunteer in the organisation. In 2020, I received a six month employee contract with Utsopi and afterwards became a board member - and that’s where I still am!

Daan: I’d previously written about sexuality and sex work as journalist, in different places around the world: Morocco, Japan, Iran, Mozambique. But I wanted to move from something that felt like just informing or entertaining to affecting real change. In 2018 I saw the job offer by Violett and was hired by them to be the first paid employee of Utsopi. Violett was well-established and funded, but at that time Utsopi had no subsidies at all and still needed to establish itself. It had turned from a collective into a nonprofit and needed to become a national movement. 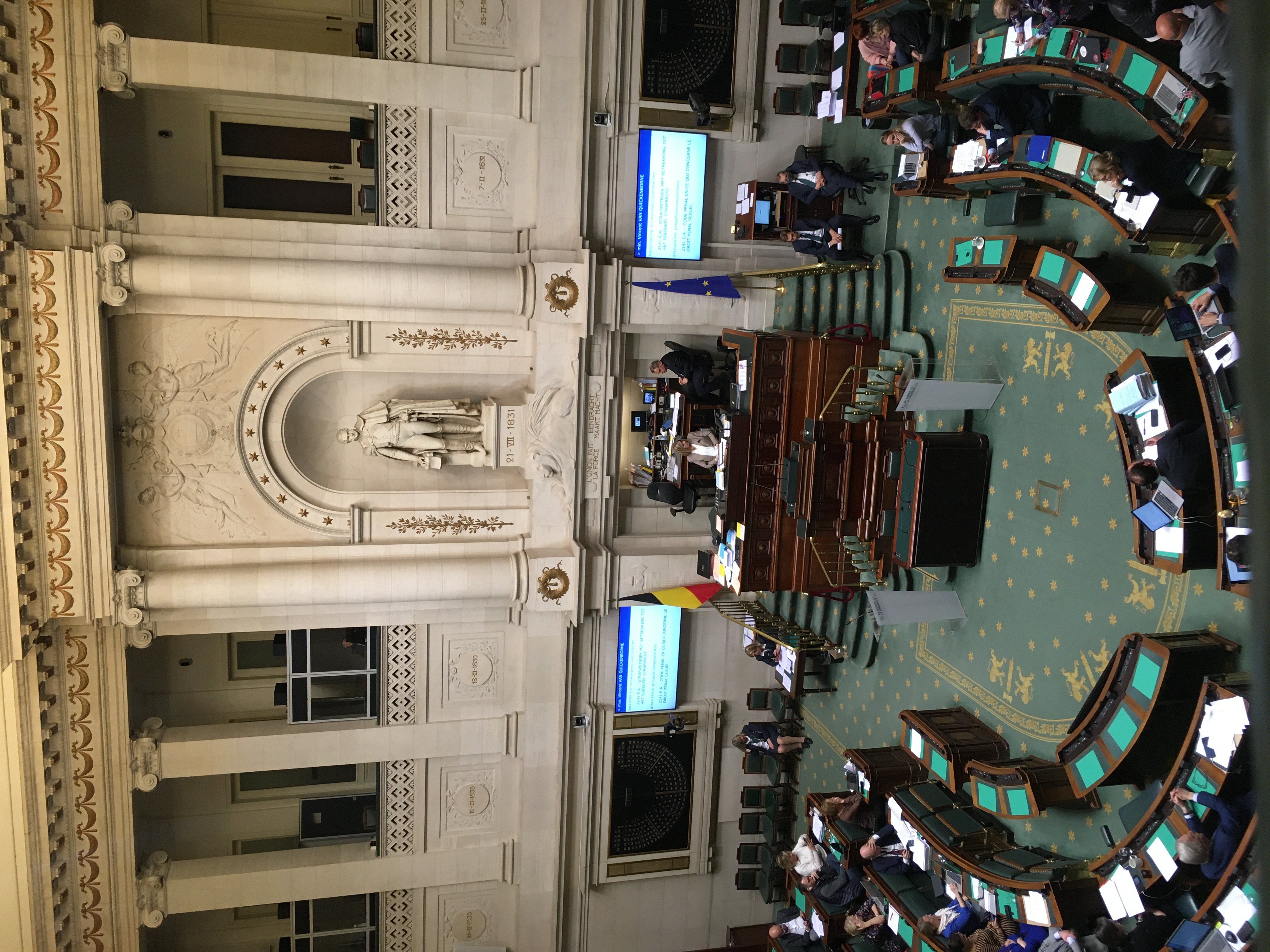 Marin: The legal reforms approved by the Federal Parliament on 18 March is an extraordinary achievement for sex workers, allies and activists in Belgium. Can you outline the key changes this law will bring for sex workers there?

Daan: To understand the changes we need to cover what it has been like before. Previously all third parties were criminalised, which meant that sex workers using any services – renting a house, having a bank account, employing an accountant – the landlords, banks and accountants were liable to prosecution because they’d be financially benefiting from prostitution. Any advertising was also illegal.

Marin: How was that enforced?

Daan: Enforcement was pretty arbitrary – we had a kind of “tolerance policy”. Belgium has red light districts, with people there renting out to sex workers, and advertising platforms like Red Lights having around 75,000 profiles, even though these practices were supposedly illegal. Having said that, sometimes, some sex workers would be targeted and prosecuted at random for advertising for themselves. Not a good situation for their rights, or their psychological wellbeing. Sex work itself wasn’t outlawed, but it was essentially impossible to get the services that you needed. There was also a lot of misinformation because providing information on the laws regarding sex work could be considered as inciting or promoting sex work.

Laïs: That was the case for me working in a massage parlour, especially because you don’t necessarily think of yourself as a sex worker.

Daan: So many people were just hiding away, doing it all in secrecy, with a lot of fear.

Marin: So we’re going to see some enormous changes.

Laïs: We can say that Belgium recognises you as a worker, a person with the same rights as any other! This is huge. With this start we will be more able to help sex workers refuse some bad conditions of work and defend their rights.

Daan: Exactly. We have never said and we will never say that sex work itself is just like any other job, but it needs to be considered as work to give sufficient protection to the people working in it.

Laïs: Even more than the practical for me is what it means to us on a personal level: we’re not invisible anymore. Like a lot of colleagues I’m proud of the achievement here and still struggling to believe it truly happened! We exist and we have the right to! I want to say it out loud to all the world! 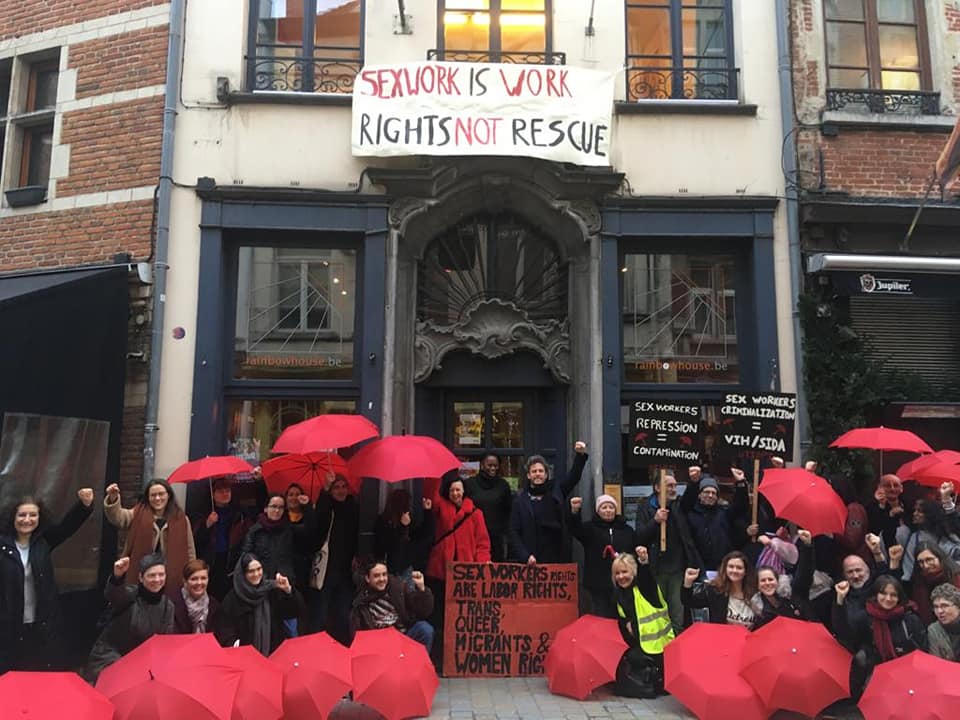 Marin: There was a little bit of debate over whether we should call this decriminalisation. What’s your take on that?

Daan: According to us, it’s decriminalisation. Officially, advertising is still criminalised but there are now a lot of exceptions on that so looking at those, it is actually permitted – it’s the same in New Zealand where they also outlaw ads, excluding where it is not viewable by children. The advertising platforms are actually expected to work together with the police, which Utsopi is really in favour of. The biggest one in Belgium was already collaborating with police and the smaller ones will now do the same. And now sex workers should be able to just rent property, open a bank account – and we have the grounds to challenge any landlords or banks that refuse them.

Marin: How did support for decriminalisation grow in Belgium? What led up to this point?

Daan: The coronavirus pandemic was actually a massive turning point for us. There was a bit of stigmatising coverage and Utsopi was very proactive about attacking these nonsense headlines, calling up and demanding corrections or for something else to be written that was factually accurate. We’re really lucky that the media were receptive and we have a lot of support there.

Marin: So you managed to use the initial misinformation to change the narrative?

Daan: Yes, and a lot of people were really surprised by it. Belgium has a high standard of living because of a huge social safety net, which we can be really proud of. So people were actually quite shocked that sex workers just had no government support, when every other sector did. In fact, Utsopi was stepping into that role instead – we did a lot of crowdfunding to send money to people, and in the hardest hit areas we organised food distributions. People could see lines of sex workers in the streets queueing for those and that visibility was so important.

Marin: So many countries in Europe have shifted to client criminalisation models. Why do you think Belgium bucked the trend?

Marin: What needs to happen now that legal reform has been passed? Are there any potential challenges or hurdles with its implementation?

Daan: We are currently negotiating the labour laws with the government and we have the first proposals already. They are based on the already existing New Zealand law.

Marin: There’s a lot of existing legislation that can be applied here.

Daan: Yes, and even from other sectors in Belgium. Safety laws, hygiene laws, protection of health. Any industry has something like that: if you work in a construction site it’s mandatory to wear a helmet.

Daan: There are still certain people that are very much against the idea that somebody could be working for somebody else.

Marin: But only when it comes to sex work?

Daan: Of course! This is a potential future fight, but luckily these are individual actors, individual politicians, as opposed to whole political parties. In the future there could also be an attempt to undercut the federal decriminalisation law with local municipal law. Some mayors around the country have previously attempted to make street work illegal this way but haven’t succeeded.

Marin: So Utsopi and the sex worker community needs to keep paying close attention to these reforms – no taking a break.

Daan: We really can’t. Even when we get this law reform passed, then the implementation starts and that needs monitoring, too. We need to keep amplifying the voices of sex workers. We also need to keep calling out the lies. Recently the Swedish Ambassador against human trafficking said at a conference in Amsterdam that since the criminalisation of the clients, Sweden is a dead market for human trafficking, while the US state department report on human trafficking says the exact opposite.

Daan: Quite. We need to keep making clear that decriminalisation is a means of fighting human trafficking. The scientific evidence pointing in this direction is overwhelming. It allows us to actually detect it, as we’re making a clear distinction between what is acceptable and what is not by way of rules and regulation on labour and workplace conditions. At the same time it’s a preventive measure, as criminalisation, to whichever degree, causes illegality, a lack of rights for victims such as the right to safety or the right to health, and stigma, which then leads to violence. In Belgium, we had the support of the federal prosecutors, the local and federal police, together with the three federally recognised centres for aid to victims of human trafficking. This helped us in convincing the public and policy makers.

Marin: When is everything going to be put to a final vote?

Daan: December 2022. And it always takes a few months before anything comes into force from the moment of the vote. I think there will be a transition time so that all employers can make the necessary preparations.

Marin: You’re really on the cusp of this extraordinary achievement. Beyond keeping decriminalisation on track – what’s next for Utsopi?

Laïs: In a practical way we still have a lot of work to do. We’ll need more money to hire people that can help us to reach out to more sex workers, especially in places where they’re working alone on the street or in massage parlours where they don’t get the support they really need, to give them info about all the changes the decriminalisation brings. We want to expand into Wallonia (a region in the south of Belgium). It’s on its way now with some volunteer sex workers but a paid employee will be needed there as well. And of course we have to continue to stabilise our current activities with members.

Daan: I also hope that we can keep growing. We’re actually still very small – just three staff, and I’m the only person full-time. Decriminalisation is number one on our list, but the second is destigmatisation. We have a growing cultural programme – book readings and performances in culture centres, festivals and events showcasing the work of sex worker artists. That helps us amplify sex workers’ voices and also find our allies.

Laïs: We will finally have the tools to attack discrimination at a legal level but the destigmatision will take a little longer.

Daan: Right, this is only the start. This is a very long battle, we need to stay vocal. This has so many consequences on so many levels: it’s about human rights, women’s rights, diversity, minorities, sexuality.

Marin: Daan and Laïs, thank you so much for your time, and a huge congratulations. 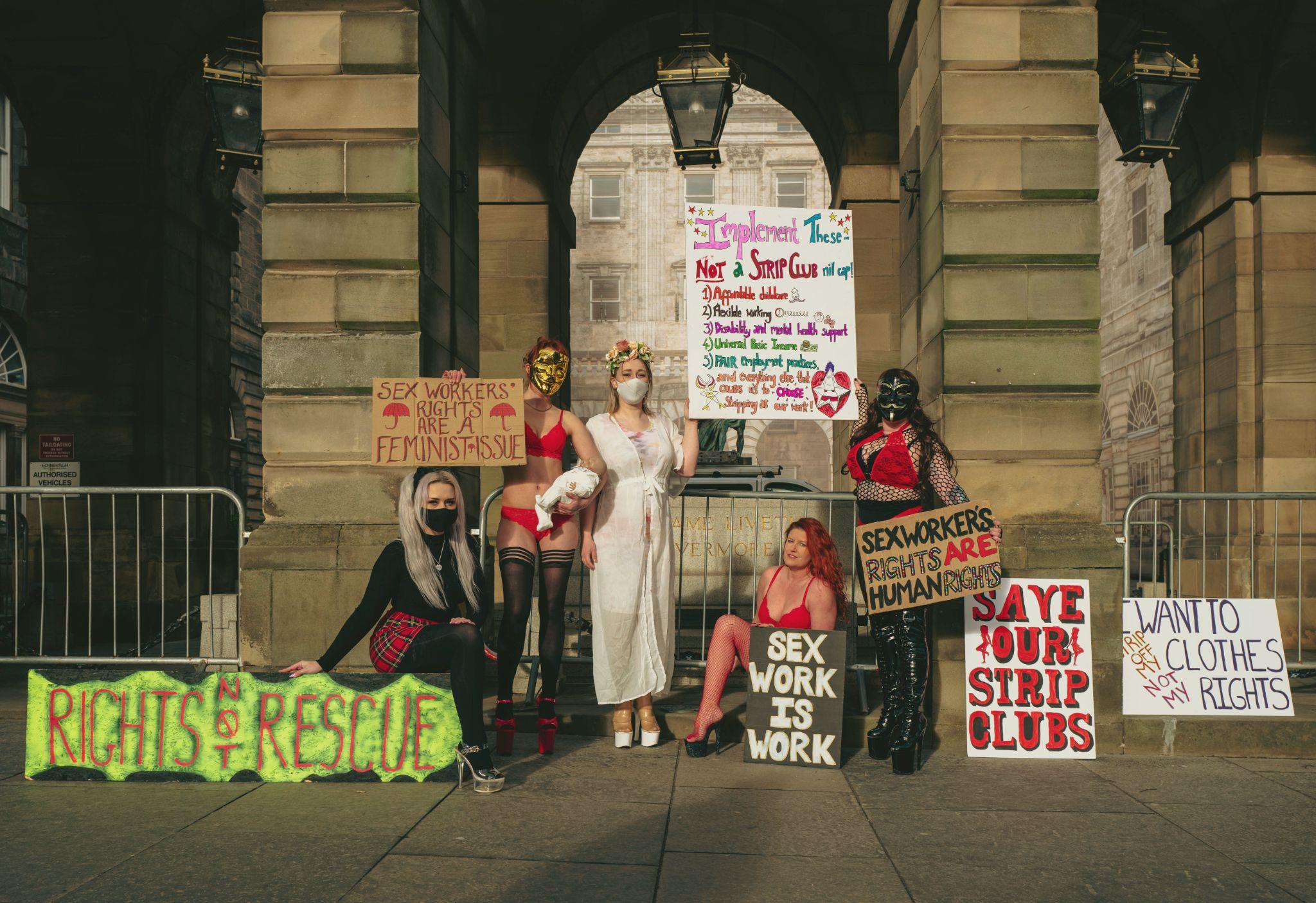 In Conversation With: United Sex Workers

sweden
in conversation with 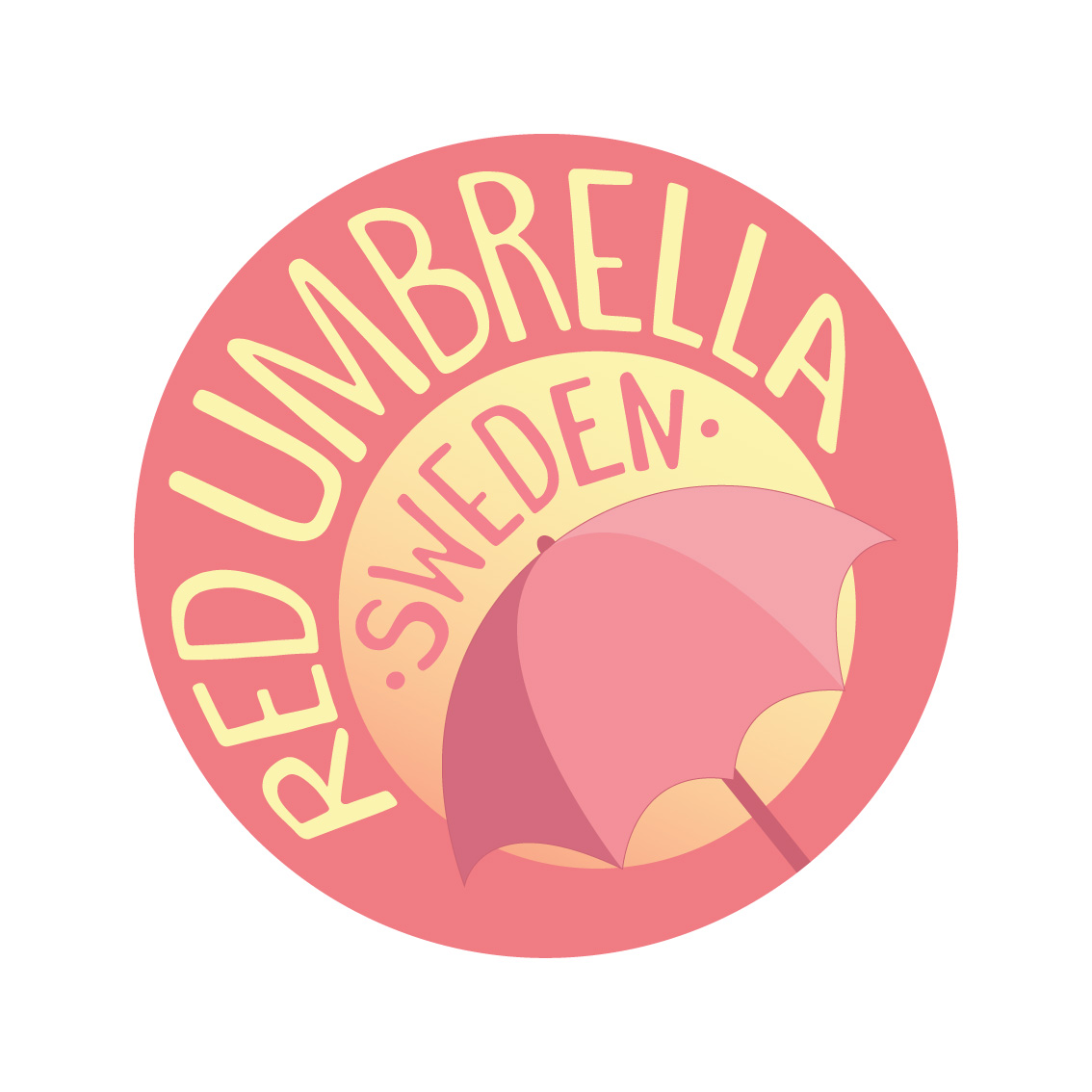